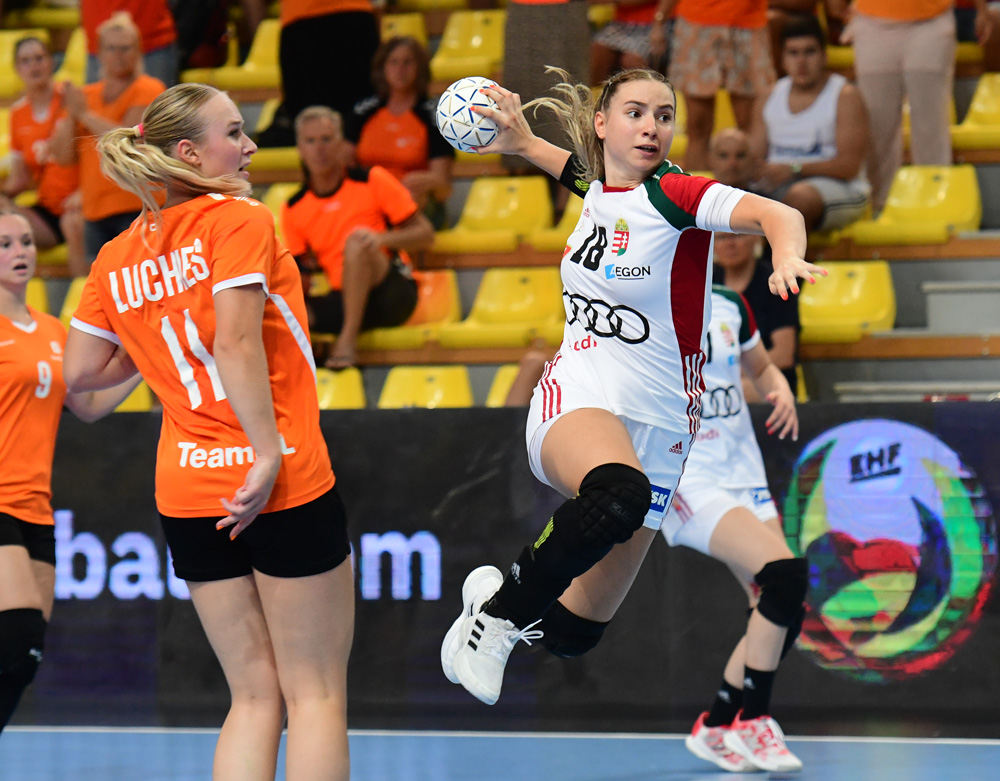 ***Player of the match – Petra Simon from Hungary***

Netherlands opened the match with two fast-break goals scored by the left wing Donna Bakker, for a 2-0 lead. Hungary not only came back, but also took the lead for the first time, when Varga hit the net for 3-4. Hungarian defense was great in this period of time, goalkeeper Imre also made some great saves, as the Hungarian team built a great 3-8 lead before the Dutch coach called his first timeout. This timeout change everything on the field, as the Netherlands team started playing great offense, making big problems to the opponents defensive zone.

The Hungarian coach changed the goalkeepers when his team’ lead was cut to 8-9, but the Netherland’s attack was just too good in this half, “the black and orange” continued to hit the net with great shot from nine meters, building a lead of their own. At 13-10 for Netherlands the Hungarian team missed a penalty, as the Dutch controlled the game until the 30. minute, going into halftime with a 16-12 lead after a great lob goal scored by Van Vliet.

Netherlands was in control also at the beginning of the second half, as Van Maurik scored into an empty net for a 19-14 lead. It was 20-14 for Netherlands when In de Braekt was suspended for committing a penalty foul, two minutes one more player on the field in which Hungary made a 3-0 run. This gave them the much needed confidence as Simon scored another goal from a counterattack for 21-19, so the Netherland’s coach had to call another timeout.

Szabo received two suspensions in just three minutes, but the Hungarians didn’t give up, keeping the opponent’s lead to just two goals with nine and a half minutes to play (24-22). Hungary continued to press, with Simon scoring another goal, for a 25-25 draw with three minutes to go. The Netherland’s team played badly in attack, allowing another goal from a counterattack, but Van Vliet scored from the wing for 26-26 with 50 seconds left on the clock.

The referees from Portugal shoed a red card to De Braekt and gave a penalty to Hungary, with Varga scoring the winning goal from seven meters.

Ricardo Clarijs (Coach of Netherlands): I think that we played a very good match. We could win but we made too many mistakes at the finish of the match. Hungary is a very good team and they didn’t miss their chance today.

Beata Bohus (Coach of Hungary): It was a great match, very difficult, against a very strong opponent. It as interesting in the entire 60 minutes, but we were the luckier team at the end, taking the victory and the bronze medal.